The participants of the meeting were the campers and staff members of:

One can say so much about camp. Through their stories, the participants tried to cover all the spheres influenced by camp. The conversation started with the stories about the magic of camp – the power that helps to turn the most mundane and familiar things into emotions and memories. By telling their stories about transformations that happened in their lives, campers and educators managed to bring a bit of this magic to their meeting. And those who hadn’t wanted to part with this magical atmosphere shared the stories on how camp helped them choose their professional path, which enabled them to come back to camp – but now as educators and camp counsellors. Camp directors also had so much to share: the stories about the road they had taken, from a camper to a camp counsellor, from a camp counsellor to a camp director surely will serve as a source of inspiration for the camp professional who just start their journey.

At the end of the meeting the participants shared their thoughts on a wide range of topics: they asked each other about differences in their camp experience, ways to overcome challenges and even discussed their favourite camp food. In lieu of saying good bye, the participants took a photo with the #ThanksToCamp signs together.

Let us hope that each of us will be able to make a contribution to this important cause, that with each story the voice of camp will get louder. 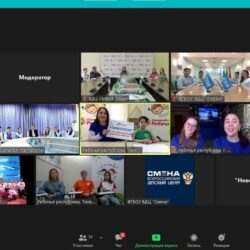